In April, we’ll have two great live, online sessions at the Creators Workshop: a discussion with comiXology on their new “comiXology Submit” program…

AND a Workshop session with former Marvel and IDW Editor Andy Schmidt discussing “The Financials of Collaboration.”

On Tuesday, April 16, 2013, our special guests on the live, online Creators Workshop will be John Roberts, co-founder and Chief Technology Officer of comiXology, and VP, Marketing, Chip Mosher for a discussion of comiXology Submit.

Over the last five years, comiXology has created the industry leading platform for digital comics. ComiXology regularly ranks as the top grossing iPad app in the entire iTunes App Store.

All submissions for comiXology Submit go through an approval process and when approved comiXology transforms the uploaded work with their Guided View technology — for free. Then the work goes on sale worldwide with the creator and comiXology sharing the profits.

We look forward to a great discussion with John and Chip about the Submit program and digital comics in general.

Then, on Tuesday, April 30, 2013 at 9pm Eastern Time, we’ll have a nuts and bolts “make comics” discussion with Andy Schmidt! 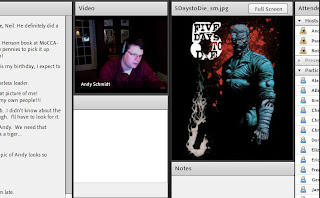 Andy will be covering the brass tacks of collaboration. How do you structure your deal with your collaborators? Who gets paid what, when, and how much? What are creative approaches to making things work for everyone? And he’ll be taking questions from our Workshop community as well!

This will be a “must see” session for writers, artists, or anyone interested in doing creator-owned or self-published comic books!

Andy is a former Senior Editor at IDW Publishing, a former Editor at Marvel Comics, and writer of such comics as 5 Days to Die and Challenger Deep.

Andy worked with nearly every major character in the Marvel pantheon during his time there, and edited titles such as X-Men, X-Factor, Alias, Secret War, and the Annihilation saga. At IDW, Andy oversaw both the Transformers and GI Joe franchises.

Andy is also the founder of Comics Experience, which he launched to help educate people who want to make comics, work in the comics industry, or just want to know more about the fantastic medium of comics.

There’s still time to join us at the Creators Workshop before these live sessions. We hope to see you there.

——————————————-
If you want to make comics, write, draw, letter, and color comics, or improve as a comics creator, you’ll find like-minded friends and colleagues in our online workshops and courses. We hope to see you there!

What People Are Saying

“I’ve worked on only a handful of projects with Andy, but know him very well both from my persistent and regular intrusions into the Marvel offices and our social get togethers with other professionals. It was obvious to me that Andy was smart, intuitive, ambitious and had a great capacity for working with people. Andy loves what he does and he’s darn good at it. We could all learn a lot from him.”